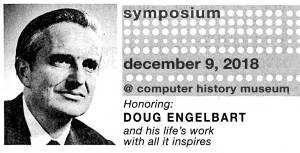 Doug Engelbart “discovered” the foundations of interactive computing @ Stanford Research Institute and presented them to the world on 12/9/1968 in “the mother of all demos”.

This event at the Computer History Museum to recognize the 50th anniversary of “the demo” drew tech luminaries such as Tim Berners-Lee, Vint Cerf, Alan Kay, Ted Nelson, and Andy van Dam. It revives memories of collaborating with Doug at Stanford Research Institute circa 1990. We were collaborating around social computing — a derivative of interactive computing / knowledge management and the predecessor of modern social media. I was at Stanford Research Institute; Doug had founded The Bootstrap Alliance — the predecessor of the Doug Engelbart Institute.

The focus of the alliance / the institute — then and now — was to improve our ways of improving in order to accelerate human / social capabilities. Like Doug — rather meta. This reference identifies Doug’s systematic approach to problem-solving — “an augmentation system for augmenting system development”. In other words — a virtuous cycle / a “flywheel effect”; a precursor of continuous improvement philosophies like lean manufacturing and agile development.

An important distinction that this description indicates: the philosophy and innovation system that Doug’s team used vs. the specific artifacts of their disruptive process. As this story describes — Doug didn’t “invent” interactive computing… he “discovered” it. He discovered it… systematically.

Another important distinction that this reference indicates: the focus on augmenting human intellect / harnessing collective intelligence that drove Doug’s team vs. the physical manifestation of technology.

Doug and his team were practicing “human-centric design” / design thinking — and reaping its benefits — long before those terms were trendy. The typical focus (then and now) tends toward the physical artifacts vs. the cognitive / social drivers; it tends toward random creativity / innovation vs. a systematic approach… rigorous intellectual process / mental discipline (especially at early stage).

I earned an endorsement from Doug Engelbart for Adaptive Avenue — a patented invention in the Web architecture / user experience domain.

The Innovation System of Doug Engelbart

The ABCs of Organizational Improvement @ Forbes

Vannevar Bush / “As We May Think”

The Mother of All Demos @ Wikipedia